Determining the efficiency of solar cells


Efficiency of solar cells is defined as the percentage of sunlight that solar cells can convert into electricity out of the total sunlight received. Solar cell efficiency varies according to climate and environment and is usually within the range of 15-20%. The highest efficiency that current production available solar cells can achieve is in ideal conditions. Although, factors such as wind, hail, dust, rain and ice impacts a solar cell, we will be focussing on the technical aspects of internal working of a solar cell here.


The current approximate capacity of the solar cell energy production across the globe is about 630,000 MW calculated from newly manufactured solar panels. In recent studies it has been found that within hours of operation, the efficiency of the solar cells drop to 18%, a decrease of about 10%. Thus even if the total capacity is 630,000 MW, the actual production is about 567,000 MW. A lot of potential energy is being lost.


Why is that the case, we will look into detail, but first let see how photovoltaic cells work. Photovoltaic cells uses photovoltaic effect which helps in generation of voltage and electric current in a material upon exposure to light. It is a physical and chemical phenomenon. To achieve this effect, materials are hit with enough energy to destabilize the electrons. Electrons gain enough energy to overcome the threshold of the bond that is keeping them together, and thus break apart from the atom and is available to move freely.


This effect is best achieved with semi—conductors, whose unique property lies between conductors and insulators which allows them to most easily elevate electrons from atomic orbit to moving freely among their atoms. Some of the first solar cells were created using pure selenium by Charles Fritts in 1884. But the efficiency of that device was just 1%. The high cost of selenium thus prevented large scale adoption due to this low conversion, making it and unviable source of electricity.

Thus the first challenge for scientists and engineers was to achieve increase the efficiency percentage while doing it with cheaper alternatives. That's when silicon become the lifeline of solar cells. Silicon is a common semiconductor material that has revolutionized electronics since its discovery.


Incoming light can either be reflected, absorbed or pass through a material. To achieve maximum efficiency it is needed that the material absorb as much sunlight as possible. Absorption of sunlight is necessary to create the photovoltaic effect. Thus the first step to increase the efficiency was to minimize the amount of light that gets reflected off the material. This is wasted energy that affects our efficiency level.


In fact, 30% of light that strikes untreated silicon is reflected. Thus even before starting, the max efficiency drops to 70%. For this reason, silicon is often treated with a layer of silicon monoxide which can reduce the light reflected to just 10%, while a second layer with a secondary material, like Titanium Dioxide can reduce it as low as 3%.


Texturing the surface of the material can further increase the probability of the light being absorbed. If it is textured, light that is reflected has another chance to strike the material and be absorbed. Some research into this has led to 3D manufacturing which can increase the efficiency up to 24% we will be looking those possibilities into another article.


Effects of Different Spectrums of Light

Only light that is absorbed can potentially cause the photovoltaic effect, but not all not all light will. We need photons above a threshold energy to increase an electron’s energy enough to allow it to move freely in the material. A photon’s energy is defined by multiplying Planck’s constant by its frequency.


Silicon requires photons with 1.1 electron volts to produce photovoltaic effect, which corresponds to a wavelength of 1,110 nanometres.


Any lower energy light with higher wavelength cannot cause the photovoltaic effect. This light will simply cause the atom to vibrate and create heat.


A good deal of solar energy emitted by the sun doesn't reach the Earth’s surface and it is absorbed in the atmosphere. About 4% of the energy reach earth’s surface is in ultraviolet, as the sun emits relatively little ultraviolet photons. 44% is in the visible spectrum and 52% is in the infrared spectrum. This may sound surprising, as infrared light is lower energy but covers a wider range of the spectrum and thus accounts for more energy. 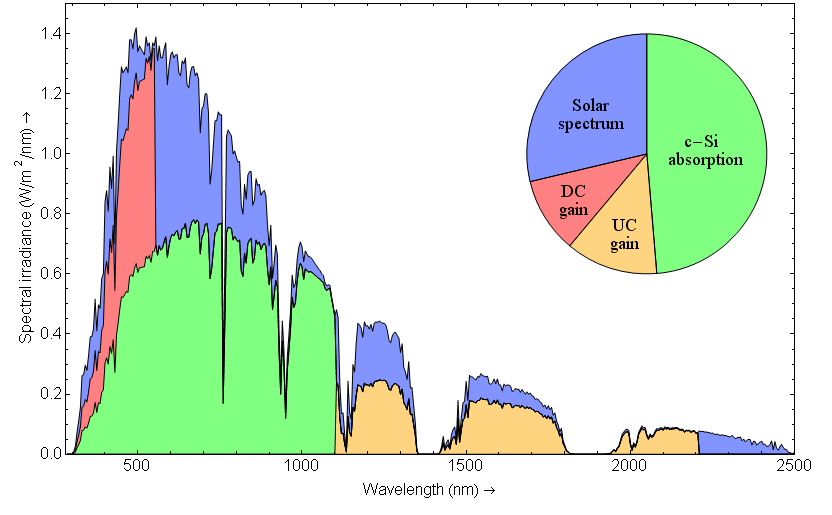 
As shown above that silicon cannot make use of light with a wavelength higher than 1,110 nanometre, a large portion of infrared energy is not suitable for conversion (approx about 19%). Another thing to note is that light with higher energy does not release more electrons, it simply produces higher energy electrons. For example, blue light has roughly twice the energy of red light, but the electrons that blue light release simply lose their extra energy in for of heat, producing no extra electricity. This energy loss results in about 33% of sunlight energy being lost. So these spectrum losses alone cause a 52% loss in efficiency. This is a lot of energy to lose, but silicon sits near the ideal threshold frequency that balances these two energy losses, capturing enough of the lower energy wavelengths, while not losing too much efficiency as a result of the material heating up. This is such a large loss in power that in some climates, active cooling, which takes some of the electricity the panels create to cool the panels, actually result in more electricity being generated. The reason why solar panels lose efficiency as they get hotter is quite complicated, but silicon balances these factors best for terrestrial purposes. We will discuss about these complexities in another article.


Working of a Solar Cell


The next trick to maximise efficiency is to limit the chances electrons have to fill these holes and to force them into our circuit as quickly as possible. To do this, we use the unique properties of silicon. Silicon has 4 electrons in its outer shell and thus readily forms a crystal structure with 4 neighbouring atoms using covalent bonds, a bond where neighbouring atoms share an electron pair. We can manipulate this behaviour and tailor the crystal material properties by adding impurities called dopants. For example, we add boron atoms to the silicon crystal wafer. These boron atoms have 3 electrons available for bonding with the silicon crystal but the silicon wants 4. So this creates a “hole” in the crystal that wants to be filled with an electron. We call this a p-type as it has positive charge carriers. Now, let’s say we create another wafer of silicon but this time we add atoms with 5 electrons available for bonding, like Phosphorus. Again, the Phosphorus bonds with the silicon, but this time we have an excess electron that can float freely about the material. We call this an n-type, because it has negative charge carriers.


Now, let’s sandwich these two materials together and see what happens. The positive holes and negative electrons migrate towards each other. The electrons will jump into the p-type and the holes jump into the n-type. This causes an imbalance of charge, because now the p-type side has more negative charges, and the n-type has more positive charges. We have just formed an electromagnetic valve that allows electrons to pass in one direction. Let’s see how this works.


Suppose a photon with sufficient energy enters the p-type side of the solar cell and knocks an electron free. The electron starts bouncing around the material and one of the two things can happen. It can recombine with a hole, resulting in no current, or it can come into the electromagnetic field at the junction of the material. Here the electromagnetic field actually accelerates the electron across the junction into the n-type side, where there are very few holes for it to fill, and to boot, the junction’s electromagnetic field actually prevents the electron from passing back to the other side. A similar thing happens on the n-type side, where holes are selectively transported across the junction before they can recombine. This means one side of the junction becomes negatively charged, while the other side becomes positively charged. We have created a potential difference or in other words, a voltage. If we add some metal contacts and external load circuit, these electrons will pass along the circuit to recombine with the holes on the other side. We have just created a solar cell.

One may notice a problem here though, by adding metal contacts to the upper surface of the solar cell, we have just blocked light from entering the cell, and thus reduced it’s efficiency. This is yet another problem engineers have had to think carefully about in their quest to optimize solar cell efficiency. Over the years, engineers have optimized both the shape and manufacturing techniques to minimize the area covered by the metal electrodes while also minimizing resistance the electrons will face in entering the external circuit.

One research paper used topology optimization to design these electric contacts. Topology optimization uses algorithms to optimize the design of objects using constraints the engineer inputs. Using this method for the electric contacts produced something remarkably like the vasculature of a leaf. Vasculature tissue on a leaf doesn't perform photosynthesis. It instead brings the water that is essential for photosynthesis to the leaf and extracts the useful products, serving a similar purpose as our electric contacts. So, of course plants have developed the perfect shape to optimize the energy they can absorb from the sun. Plants have had millions of years to evolve this shape. However, most solar cells, use a simple grid shape, as it is cheap to manufacture. This typically results in an efficiency loss of about 8%.

All told, these effects result in typical modern solar cells having a laboratory tested efficiency of 20%. So, what has happening to cause that drop to 18% after a couple of hours of operation? This problem was the focus of hundreds of scientific papers and many found clues to the problem. Many noted that the efficiency drop was correlated to the concentration of Boron and Oxygen in the silicon and noted that the drop didn’t occur when Boron was substituted for Gallium. Thus, it was known that a boron oxygen defect was causing the issue. Others found that the defects could be reversed by heating the silicon in the dark at 200 degrees for 30 minutes, but it would return once again upon exposure to the light.

Efforts in reducing the problem have primarily focused on reducing the concentration of oxygen impurities in the silicon wafers, which occur as a result of the Czochralski silicon wafer manufacturing technique that is the source of the 95% of the silicon solar cells. These manufacturing techniques are still a point of research and the engineers and scientists were working blindly. Little was known about the actual defect creation process and how exactly it was causing such a large drop in efficiencies, leaving engineers with less information to solve the problem with.

One paper used a special imaging techniques and observed these boron oxygen molecules converting into something the paper refers to as “shallow acceptors” when exposed to light. In essence, they observed the defects transforming into little electron traps that acted as recombination sites, and thus reduced the time and probability of electrons entering the circuit to do work. With this knowledge, engineers can now develop better techniques for preventing this phenomenon and hopefully help increase our renewal energy capacity in coming years.

It’s easy to think that technology has reached a point of being so advanced that knowing where things can be improved is practically impossible for the average person, but that simply isn’t true. A little bit of research into any area will reveal countless problems humans are still grappling with fixing.